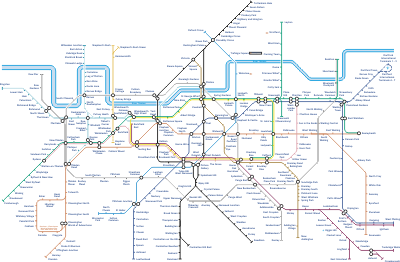 The London Underground map, rearranged so that South London gets most of the stations.

The lines and river are identical to the real Tube map, but rotated so that Castelnau exchanges places with the Isle of Dogs: the axis of the river's rotational symmetry passes roughly through the London Eye.

It has been pointed out that Kew Gardens and Silvertown stations can be found one from each end of the North (South?) London Line in both this and the real map, which is a nice coincidence.

A similar, independently conceived map was published in the Evening Standard in December 2004, but it didn't rotate the river.